2016–2019
Mega Construx is a brand that produces highly detailed construction sets and small scale figures in accompaniment. Mega Construx began their Destiny upon receiving the license to do so in early 2016, while the brand was still known as Mega Bloks. As of 2019, the Destiny line of Mega Construx construction sets has been cancelled, likely to do with the split between Bungie and Activision that same year, as publishing and licensing rights were acquired by Bungie from Activision.

Mega Construx Destiny was first announced on February 11th, 2016, and officially began later that year.[1] The line went on to last for 3 years, ending in early 2019. In this time, the company produced many sets, including individual figures, armory sets, arsenal sets, sparrows, ships, and other dioramas and vehicles, as well as a few exclusives. It was shared by the @MegaConstrux official Twitter account that there had been no Destiny sets in production at Mega Construx as early as July 16th, 2019,[2] only for it to later be confirmed by official sources on the Mega Construx forums that the line was cancelled on December 5th, 2019.[3]

It is unknown why the line ended, reasons ranging from potentially low sales, as well as the more widely believed idea that Mega Brands lost the license when Activision split from Bungie in 2019, suggesting that Activision handled the licensing of the rights to the intellectual property of Destiny for third party products more so than Bungie did. Given that other companies have eventually continued producing Destiny items, such as Bigshot Toyworks, The Coop, and Loot Crate, there is a possibility that the line could be revived in the future.

The Guardian Series began in 2018 with a range of six figures sold individually, with a suggested retail price of $4.99 USD. Additionally, they included a Ghost, a weapon, and a small tricorn display stand.

The Armory Series began in 2016, retailing for $8.99 USD. Each set entails a single Guardian micro-action figure, an alternate armor set, three weapons, a Ghost, and a tricorn display stand. The Future War Cult Titan and the Dead Orbit Hunter sets are considered rare.

The Arsenal Series began in 2018, and only came to include two sets. They were priced at $9.99 USD, and included two figures, four weapons, a display, a Ghost, and a large Engram construction. Both of these sets are considered rare.

The Mega Construx Sparrows would be one of the longest running staples to the Mega Construx Destiny line, seeing multiple releases yearly from the time the line began in 2016. These generally sold for $15.99 USD, and included one Guardian micro-action figure, one weapon, one or two enemy figures/builds (including their own weapons), a Sparrow build, and a Ghost. The EV-38 Laurelbearer Sparrow set is considered rare.

These sets make up the main bulk of Destiny sets, mostly comprised of vehicles, but also including dioramas and boss sets. The Dominus Ghaul Assault and Cabal Thresher Gunship sets are considered rare. 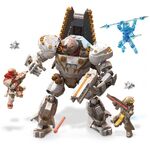 Kubros is a Mega Construx subline akin to Lego's Brickheadz, a series of brick-built figurines with stylized proportions, mainly indicated by the large head on a smaller body. Destiny was represented in this line in 2016 with the Hunter Kubros set.

The Mega Construx Signature Series is a high-end collectible line, characterized by high piece counts, very large builds, and high market price. Destiny was eventually represented in this line in 2017 with the Cabal Harvester Dropship set, which was the biggest Destiny set ever produced by Mega Construx.