McFarlane Toys is a merchandising company with a focus on action figures of various sizes and roleplay items. The company began releasing Destiny products in 2017, with the company's collaboration with the franchise ending abruptly only a year later in 2018.

It was announced in early 2017 that Bungie would be working with McFarlane Toys to create Destiny collectibles.[1] During New York Toy Fair 2017, in February of that year, the first wave of Destiny products was shown off. These products consisted of the first three 7" Guardian figures, the Vault of Glass Titan, Iron Banner Hunter, and King's Fall Warlock, and the 10" Deluxe Lord Saladin figure. Also on display was a role play replica of the Iron Gjallarhorn, as well as a model of the Iron Gjallarwing Sparrow intended for release later in the year alongside the rest of these products, however, this was ultimately canceled as it never saw release.[2] Unfortunately this would become somewhat of a trend for McFarlane Toys regarding the Destiny brand, as there were multiple products revealed through various avenues that would fail to see release. There were another four exclusive figures revealed at a later date as part of this initial wave of products, these consisting primarily of Shader variants of the previous three Guardians, usually also including a new head sculpt based on Exotic Helmets from in-game. All of these products were slated for release in July of 2017, and (with the exception of the Iron Gjallarwing Sparrow) would eventually be fully released in August of the same year.

After this, a second wave was planned for release in Fall 2018, revealed during New York Toy Fair 2018.[3] However, many of these new figures would never see release. These reveals consisted of three new 7" figures in representation of the Vanguard leaders, Zavala, Ikora Rey, and Cayde-6, a 10" Deluxe Lord Shaxx figure, a role play replica of the Titan Sentinel Shield, and three new Guardian figures based on armor found in Destiny 2, including a Parade Titan, a Crucible Hunter, and an Iron Banner Warlock. Unfortunately, these three were the products revealed at that time that were never released, presumably cancelled, for unknown reasons. Also released this year were new variants of other figures, one depicting Cayde-6 summoning a Golden Gun, and the others being additional Shader variants for both the Iron Banner Hunter and Vault of Glass Titan figures.

Destiny products by McFarlane toys screeched to a halt after 2018, with only one figure planned for release in 2019, the Chatterwhite Shader variant of the Vault of Glass Titan figure. This would have been the final release under the Destiny brand by McFarlane Toys, however, it too was eventually cancelled before it saw release. While it is unknown why these products ceased production, speculation might suggest that the Bungie-Activision split in 2019 may have been a factor, as that during the time this event happened, many companies seemingly ceased producing Destiny merchandise, such as Funko and Mega Construx, in addition to McFarlane Toys. Sales might have also been a factor, but it is not known how successful or unsuccessful these Destiny products were for McFarlane. 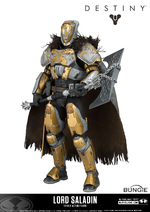 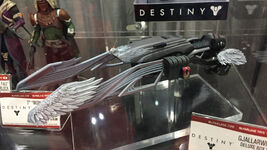 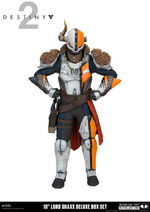 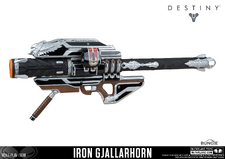 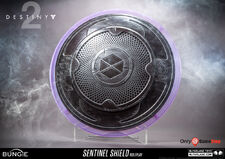