View source
watch 01:36
We're Getting Mutants in the MCU - The Loop
Do you like this video?
Play Sound
Special Editions // Destiny: The Taken King Collector's Edition

The Destiny: The Taken King Collector's Edition is a special edition release of The Taken King. It is the only physical special edition release for the expansion, and it was exclusively available at Gamestop. It sold for $79.99 USD, and officially released alongside the launch of the expansion on September 15, 2015.[1] It includes an array of various collectibles based on the franchise, as well as exclusive in-game items.

This release majorly comes from the perspective of Cayde-6. This is due to the fact that the central item included therein is the Modified Treasure Island Book, which is meant to be a gift from Cayde. It includes various ramblings and sketches by Cayde, as well as a stash of other belongings of his. These include the Strange Coin replica, the Weapon Schematic, and the Collection of Relics and Artifacts. The latter of which consists of a charcoal sketch of Saturn from the perspective of one of its moons, two playing cards, an "Earth" sticker, a pentagonal Tex Mechanica patch, and a handwritten letter from Cayde. The Weapon Schematic is a poster depicting the schematic to the Sleeper Simulant, and Exotic weapon introduced in The Taken King.

Also included in the collector's edition is a SteelBook for The Taken King. It is silver in color and features radial design work, similarly to the Destiny SteelBook. Inside the SteelBook case is a game disc for Destiny, as well as digital codes for The Dark Below, House of Wolves, The Taken King, and the Taken King Digital Bonuses.

The collector's edition released with variants for both of the major platforms the expansion would be releasing on, Xbox One and Playstation 4. The only differences between these releases are the branding on the box outer slip cover, and the digital codes included for the game content.

This release came packaged in a 9"H x 6.5"W x 3"D (22.9cm x 16.5cm x 7.6cm) box, featuring Taken effects on the front side and the Tricorn on the back side. On the right side of the box is a door which features a light magnet in order to keep the door flush with the box when closed. The inside of the door features flavor text, while the inside of the box consists of slots for the included SteelBook and Modified Treasure Island Book to fit into.

Also included as part of the packaging was a slip cover, which featured details about the set such as the title, the respective platform title, and the edition's contents. 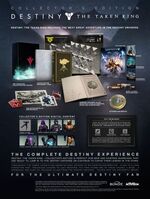 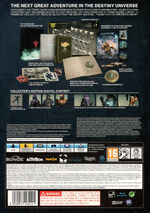 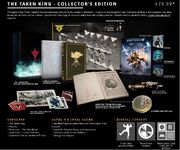 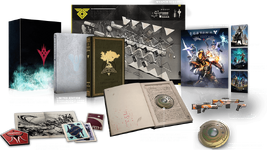 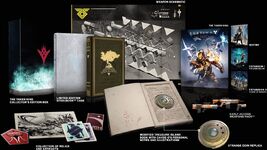 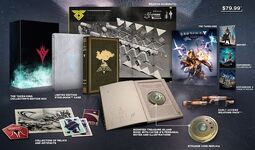